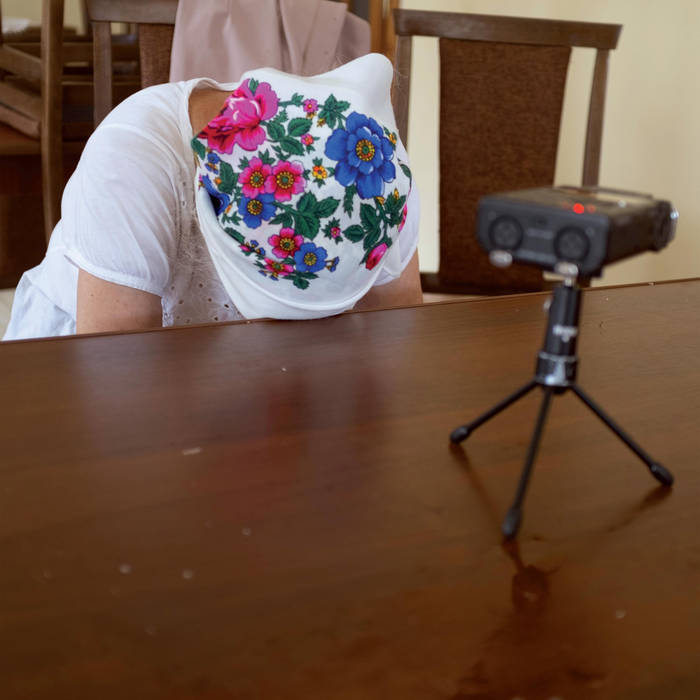 Michael J Bates Sounds of a real life culture, that could be "disappeared" due to the onslaught of globalist "levelling up". Recordings like this are historical artefacts and they are also treasures worth keeping to highlight our humanity. Favorite track: A cook cooked a lovely porridge.

I first discovered khroniky – Ukranian folk songs – in the Highlands of Scotland. I was watching a screening of Bajka, a mesmerising documentary made by the filmmaker Lucia Nimcová and sound artist Sholto Dobie. I knew nothing about these ballads beforehand, but I was fascinated by these odd, beautiful songs, especially the easy way in which they mixed misery and levity, where gentle melodies blend with tales of dark violence. The folk songs describe hardship, murder, torture, death in gulags, heavy drinking, outsmarting men, love affairs. But they’re often very funny too – many of the songs make fun of marriage, and there’s an amazing subcategory of khroniky songs called potka (vagina) songs.

The khroniky have never been properly documented because they were considered too crude, or contained lyrics that were problematic, politically. When Ukrainian folk songs have been archived in the past, it’s normally a sanitised, more polite version of the ones that Lucia remembers from her childhood. Lucia grew up on the other side of the Ukrainian border in Slovakia. She is part of the Rusyn (Ruthenian) minority ethnic group found in the borderlands of Slovakia, Hungary, Romania, Ukraine and Poland. Rusyn is a centuries-old Slavic language, looked down upon as a poor, uneducated dialect by the neighbouring Ukraine and Slovakia. It was forbidden to talk about Rusyn culture at Nimcova’s primary school, but the khroniky stayed in her memories.

“I remember weddings when I was young,” says Lucia, who now lives in Addis Abeba, Ethiopia. “At the end of the night, when everyone was drunk and the young couple would go around their guests, people would sing in Rusyn. There was singing and dancing, and songs about being in prison or falling in love. I picked up the lyrics and sometimes my mum would make my sister and I sing them for people we met on the train. I was about five or six but the lyrics still come back when I sing to my kids.”

Determined that these rich, nuanced, unique songs shouldn’t be forgotten, she decided to record them. Over two years, Lucia, joined by experimental musician Sholto Dobie, visited Rusyn villages high in the Carpathian mountains to rediscover the songs and make the documentary. It was at the beginning of war breaking out in Ukraine in 2014.

“The Rusyn community is a very closed one,” explains Lucia. “Sometimes we’d have to wait several days to hear someone sing; we had to earn their trust before they shared something very personal to them. We’d stay up ‘til 5am at a wedding, then go straight to a morning baptism, or collect haystacks with the villagers, hoping they’d sing while they were working.”

DILO is named after an important independent Ukrainian daily newspaper that was shut down when the Red Army entered Lviv in 1939. The four long tracks on DILO blur field recordings with song; an unpolished, privileged glimpse into a private world. We hear dogs barking and insects buzzing in the summer heat, then a blast of hurdy gurdy or violin will drift in, or a plaintive song soars softly over the rural background noise, with casually harrowing lyrics about a cuckoo, “lifeless in a world of misery”, as translated in the album’s booklet.

For both Lucia and Sholto, it was important not to tamper too much with what they heard. “When you think about ethnography,” Lucia explains, “you have to have a lot of time, love and respect to document it with sensitivity.”

“The songs all have their own atmosphere and intimacy from the spaces they were recorded in and it was important to maintain these particularities and move with them,” adds Sholto, who now lives in Vilnius, Lithuania. “They guide and sometimes interrupt a journey between interiors – domestic spaces; in kitchens, by the fire – and exteriors; marketplaces, cow sheds. We used contact microphones to record metal bridges and fences, and we spent one afternoon recording a wool processing machine, the details of the rattling and tuning wheels are the ground layer for the third track.”

Lucia took rough notes and diary entries during the recording process, which are now shared in the booklet alongside a selection of lyrics, loosely translated, but revealing the depth and astonishing beauty that sometimes lies in the language of these folk songs.

The feel of the album is intimate, flipping between laughter, where a woman sings about selling her pussy to buy a cow in one track, then shifts to a raw, painful truth; an adult son asks his mother why his dad won’t be back for dinner, as he’s gone to war.

Since Lucia and Sholto began working together in 2014, they have shared the audio recordings on radio and film and shown photos in gallery spaces, making sure these special, smutty, poignant songs don’t get lost. This new record and booklet joins that same continuum, another glorious fruit from the same rare tree.

Thanks to my parents, Adrian Nicole Leblanc, and Skriblyak family

Mastered by Tomáš Vtípil / dinn (dinn is not noise)
www.vtipil.cz


This project has been supported using public funds provided by Slovak Arts Council.