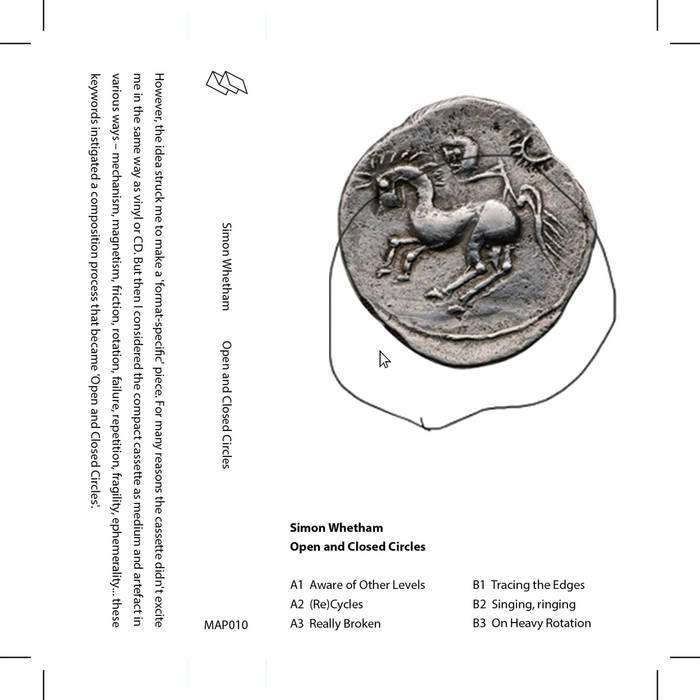 „Mappa invited me to make a work for cassette release. At the time I was putting finishing touches to a work for CD that was the result of 3 years of collection, distillation, presentation and consideration. I had made a conscious decision to stop composing in favour of making work for installation and performance.“

However, the idea struck me to make a 'format-specific' piece. For many reasons the cassette didn't excite me in the same way as vinyl or CD. But then I considered the compact cassette as medium and artefact in various ways – mechanism, magnetism, friction, rotation, failure, repetition, fragility, ephemerality... these keywords instigated a composition process that became 'Open and Closed Circles'.„ SW

Simon Whetham (Bristol, UK) is a sound artist in a constant creative movement. During his sonic journeys, he is focusing on field recordings and through the concerts, workshops, sound installations and soundwalks he is presenting unique approaches to music composition, spatial exploration and the act of listening itself. The result is a kind of global and expanding fictional sound map without GPS coordinates.
„Using site-specific recordings does not necessarily mean one is documenting a location, but merely uncovering sounds or vibrations that surround the listener on a daily basis that they are not normally aware of or appreciate.“

Whetham is not interested in the documentary frame and visual representation of the recordings, but rather in searching for a listening space, defined by specific acoustic qualities, unknown object resonances and fluid atmospheres. Assemblage of sonic magnetism, friction, rotation, failure and repetition of the cassette medium with the environment sounds (industrial and natural) from various parts of the world reminds the process of acoustic archaeology. Context is hidden under the ground, and we hear only raw material, exempt sounds linked by unstable and abstract connections.

„Some sounds are instantly recognisable. However, each person who hears that sound will have a different image or scene in their mind that the sound has conjured. Once you accept this, you should not try to explain exactly what the listener is hearing, as they will already have something personal to bring to the piece.“

We are presenting 'Open and Closed Circles' collections by Simon Whetham, which is the tenth edition in our mappa catalogue.