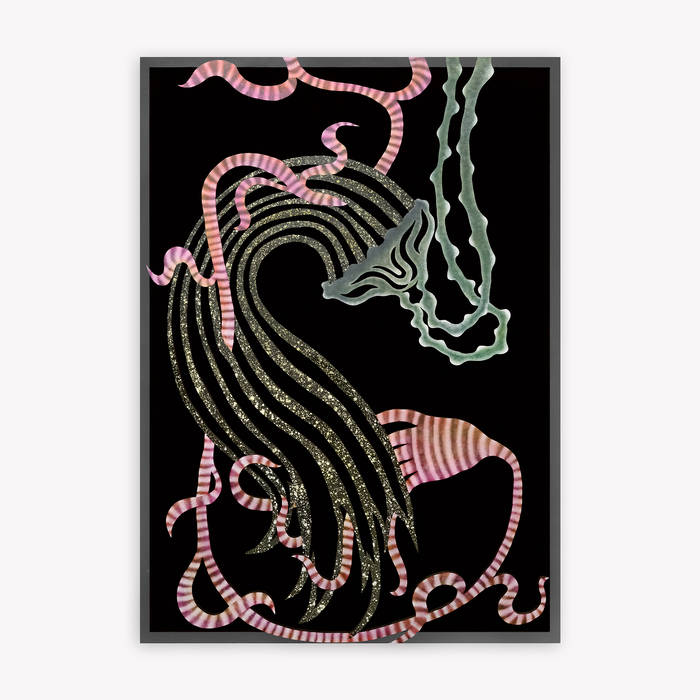 In 2019, we released Grykë Pyje's second album, "Collision and Coalescence". In the autumn of 2021, we announced the German/Finnish duo’s third LP, "Squirlich Stroll", to be released on vinyl in December. On this occasion, mappa join forces with Nonlocal Research to present "The Fantastic World of Grykë Pyje" a double cassette compilation containing both albums of the duo.

The missed seed of cryptobotany music. Jani Hirvonen (Uton) and Johannes Schebler (Baldruin) reconstruct the mesmerizing world of the Grykë Pyje swamp tribe. A ceremonial sonification of the sacred herbarium, painted myths of the animal kingdom and voices behind the thicket. A return to the time when the forests, tree crowns, soil, thickets and heaven were full of continuous murmur. Or, on the contrary, a vision of a future in which the chaos of natural noises will reign. Slimy earthworms and phosphorescent bugs crawl out of the holes and gaze toward the sky. Brightly colored birds pick juicy fruits and there is no silence, because it is absorbed by the buzz of a virgin ecosystem. In the caves, marshes and hollows of trees, the most important questions are decided. A polyrhythmic rain falls from the sky and washes the prehistoric mud from mammalian hair. Somewhere to see human footprints, but those who have left them are long hidden under giant leaves. The light, reflected from the vibrant structure of life itself, dances for all, in full color. The feast of photosynthesis. Nothing to see from the top. Plants, moss and mushrooms grow at a tremendous rate. They climb each other to break through the lush green blanket.

Maintaining the fabled tone of their previous album, Jani Hirvonen and Johannes Schebler dig deeper into the sonic vein of myth and fabric of yonder. The music in "Squirlich Stroll" unravels as a yarn brought back from a wild voyage.

On uncharted areas of medieval maps where potential dangers were thought to exist, the inscription "Here be dragons" was used to warn as much as to tempt explorers willing to cross limits. Myth awaited them as a blank page of dormant territory, yet also to be proved unlike and reinvented. In such pliable borders, wonder had the favorable conditions to blend experience and imagination, crafting creatures with an eye instead of a bellybutton, arms instead of ears and ears instead of fingers, hypnotizing spirals where a mouth should have been. These chimeras, though fictitious, allowed explorers to express their delusions along with their fears. "Here be dreams", we hear nightmares. Here be mushrooms the size of pyramids that sing lullabies for mountains. Here be talking roads that lead to volcanoes throats and spit you back to flight. Here be art of bending trees into braided bridges like in Meghalaya, and the time gap between seed and living ruins.

Let that be the compass, the astrolabe. Yet, the music in Squirlich Stroll comes with these journeys already embraced, unraveling as a story told by wanderers visiting town, nourishing fantasy. The sonic language and diction employed here are crystal clear. Sounds are sharp and pure. Growls, howls, shrieks, tingles, rattles, moans, excretions and even hymns sung by landscape and creatures alike do not run over each other. There is no chaos, but ambience, cohabitation. The duo masters dramaturgy, providing every voice with focused turns and character, guarding their parley with caution and care, convoking them mainly through soothing synth melodies that enable an analgesic, sedative mood. Clusters of sounds gathered are articulated through the album with the inherent luminosity and required stability to accomplish what peaks in, as the title of the final track reads, a new dawn.

All tracks recorded in Turku (Finland) and Wiesbaden (Germany) by Jani Hirvonen and Johannes Schebler from 2018 – 2020
uton.bandcamp.com
baldruin.bandcamp.com

Released as a collaboration between Nonlocal Research and mappa.
nonlocalresearch.bandcamp.com