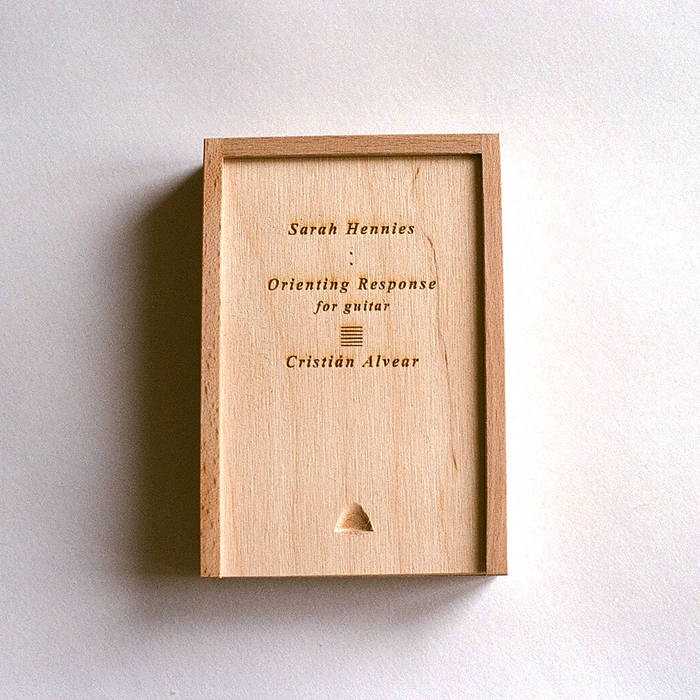 “Orienting Response was written specifically for Cristian Alvear at his request. In writing the piece I wanted to see if I could create the same kind of focus and intensity I have created with percussion instruments using an instrument (the nylon stringed guitar) that is naturally not well-equipped to produce the type of timbres or high dynamic levels that I have worked with up to this point.”

The score Orienting Response (2015-16), written by Sarah Hennies specifically for Chilean guitarist Cristian Alvear, is composed of six parts with short instructions describing some unusual techniques, such as:

Play as accurately and consistently as possible but with the assumption that “mistakes” are inevitable.
Allow “mistakes” to occur, do not attempt to correct them.
All sounds should ring freely (as long as is possible) unless otherwise indicated.
All timings and tempi are approximate and flexible.

Sarah Hennies, one of the most compelling young American composers, works on the narrow edge between contemporary composing, solo percussion creation and a virtuous improvisation in projects as Meridian and Obody. In Orienting Response she keeps on observing and exploring even more deeply various percussive acoustic phenomenas, which are on this record, hidden inside of classical guitar body.

Cristian Alvear is, unlike delicate interpretations of compositions by Jürg Frey, Radu Malfatti, Michael Pisaro or Antoine Beuger, filling the quiet contemplative gaps with repetitive fields which direct the attention to the sound itself and to the concentrated interplay of subtle changes and mistakes. Alvear explores the possibilities of the guitar in a very immersing way, full of natural resonances, drones, deep listening details and a faith in a different guitar sonicity.

Mappa presents a neverending cassette loop, a radical approach to reductive repetition, created out of minimal material with maximal precision, modesty, and canniness.